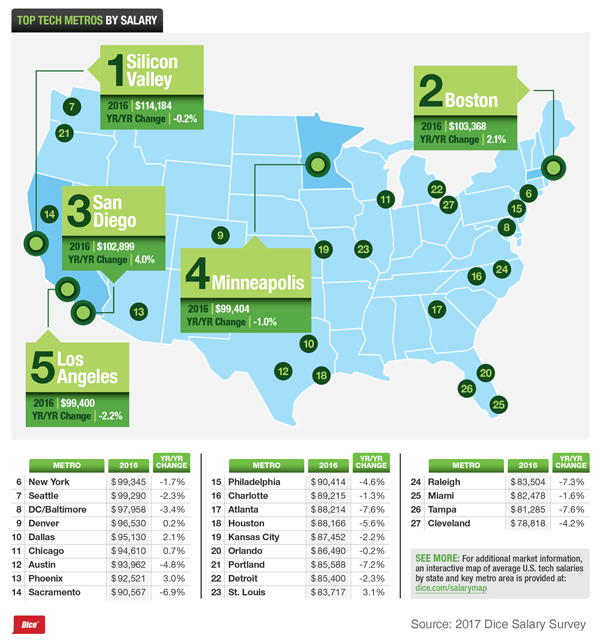 Which U.S. cities boasted the biggest increases in salaries last year? According to the latest Dice Salary Survey (PDF), they might not be the ones you think. Although major tech hubs such as Silicon Valley and New York City continued to pay out high average salaries to those tech professionals with the right mix of experience and skills, a number of other cities actually saw more significant upticks in pay. For example, San Diego's tech pros enjoyed a year-over-year increase of 4.0 percent, to an annual average of $102,899. St. Louis came in second, with 3.1 percent, followed closely by Phoenix with 3.0 percent. Boston was one of the few major tech hubs to see a significant increase last year, bumping 2.1 percent to $103,368. (Curious about how your own salary matches up to the national average? Try out our Salary Comparison Tool.) Meanwhile, some metro areas saw notable declines in tech salaries. For example, Los Angeles decreased 2.2 percent between 2015 and 2016, to $99,400; Silicon Valley ticked downward ever so slightly (-0.2 percent), although average salaries remained a blistering $114,184. What's the reason behind these gains (and declines)? Although the largest technology hubs in the U.S. offer considerable attractions to both startups and established tech firms, smaller towns have a lower cost of living and (in some cases) access to a considerable pool of viable tech talent. Rising salaries in places such as Phoenix and St. Louis hint at smaller cities aggressively attempting to become the "next Silicon Valley" by encouraging tech firms to skip the crowded, expensive tech hubs and settle in places with plenty of infrastructure and other amenities. For tech pros on the lookout for their next big opportunity, these smaller tech communities with "room to grow" might prove an attractive alternative to well-established tech hubs. Whatever their size, however, all cities need some key elements in order to host a lively tech community, including access to a pipeline of talent (often provided by a local university and college system), sufficient infrastructure to support growing companies, and easy access to funding.
Dice Employers Recruiters Salaries Salary Survey
AUTHOR