Dice Survey: Tech’s Diversity and Inclusion, By the Numbers

Dice Staff
Jun 12, 2018
3 min read
It’s no secret that the tech industry trails significantly behind many other business sectors in its efforts to recruit, retain and support diverse workers. According to the U.S. Equal Employment Opportunity Commission, there are half as many African-Americans and Hispanics in tech as in the rest of the private sector, and 83 percent of tech executives are still white. To take a closer look, Dice connected directly with tech professionals to report on their different workplace experiences based on their gender, ethnicity, sexual orientation and age. Download Dice’s Diversity and Inclusion Report Now!

The Survey finds that discrimination and bias are still major problems in tech, with workers experiencing or witnessing discrimination at their current or most recent employer: 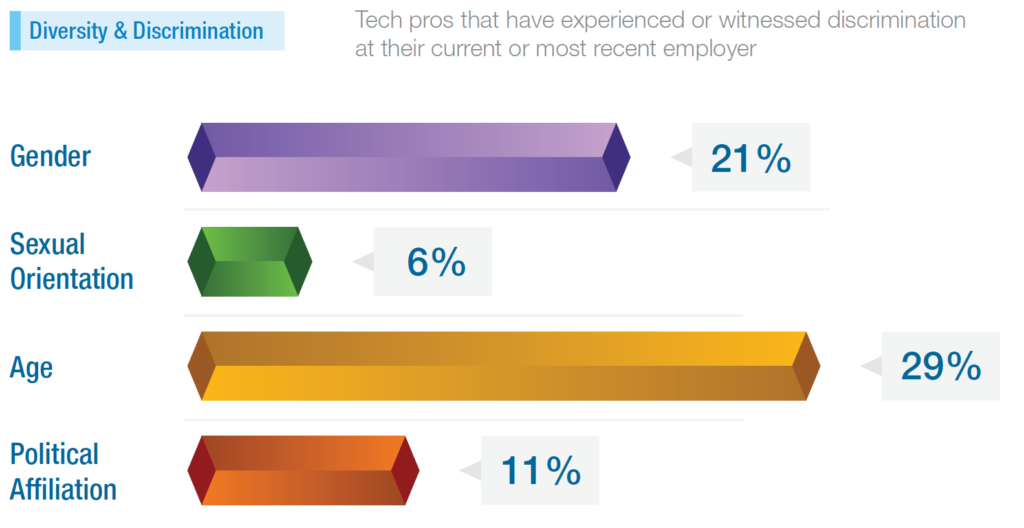 Being a woman in tech today is especially hard. The Survey reveals that nearly two-thirds (62 percent) of U.S-based women in tech say they have had their ideas ignored until a man repeats them, and more than half report that they’re talked over/interrupted in a meeting and have been assigned low-level tasks. Equally concerning, two-thirds of the women surveyed feel that female employees are not equally represented at senior levels within their current or most recent employers. And 63 percent think nothing will change this calendar year. “Young women especially are looking to leadership teams to see other female professionals so they can understand the path to those positions,” said Pam Bilash, Dice’s VP of Human Resources. “Employers that place high value on diverse leadership teams and promoting women to senior-level positions will definitely stand out among female recruits.”

While 90 percent of heterosexuals are comfortable discussing their sexual orientation at work, only 66 percent of LGBTQ employees feel the same way. It’s no surprise then that 40 percent of LGBTQ individuals believe sexual orientation discrimination exists in the workplace. Age discrimination is a significant issue, too, with Baby Boomers and Gen Xers hit hardest by ageism. Around 68 percent of Baby Boomers and 40 percent of Gen Xers reported feeling discouraged to apply for jobs due to age. And, a whopping 80 percent of 46–49-year-old tech pros feel deeply concerned about their age impacting their career.

For the last few years, the hard reality has been that we lack enough qualified candidates to fill the emerging jobs in tech. And the problem is only going to get worse. Keeping the talent pipeline robust and flowing is critical, and the Diversity and Inclusion Report is shedding light on one important factor that negatively impacts the supply of tech talent. When both men and women see gender discrimination at work, they are far less likely to refer female friends and colleagues to the company. Since 40 percent of women have experienced discrimination and bias in the workplace, it makes sense that those experiences have led to a decline in job referrals.

When a balance of all genders, ages, ethnicities and socioeconomic backgrounds work side-by-side in tech, research shows, the perspectives and creativity gained often results in significant improvements to the business bottom line. Understanding the experiences of everyone in tech can help inform the ways employers recruit candidates for the highest productivity, most significant business returns, impactful product and services innovation, and best workplaces. Download Dice’s Diversity Report now to find out what you can do to be intentional about culture, diversity and inclusion, and attract the best and brightest tech talent from every background.

From February 13 to March 30, 2018, Dice surveyed U.S. and U.K. registered users and visitors of Dice and eFinancialCareers. A total of 3,993 professionals responded, with more than 1,200 men and 500 women completing the entire survey. Of those who completed the entire survey, more than 500 identified as Gen-X, and 400 as Millennials.
Dice Diversity Inclusion Recruiting
AUTHOR