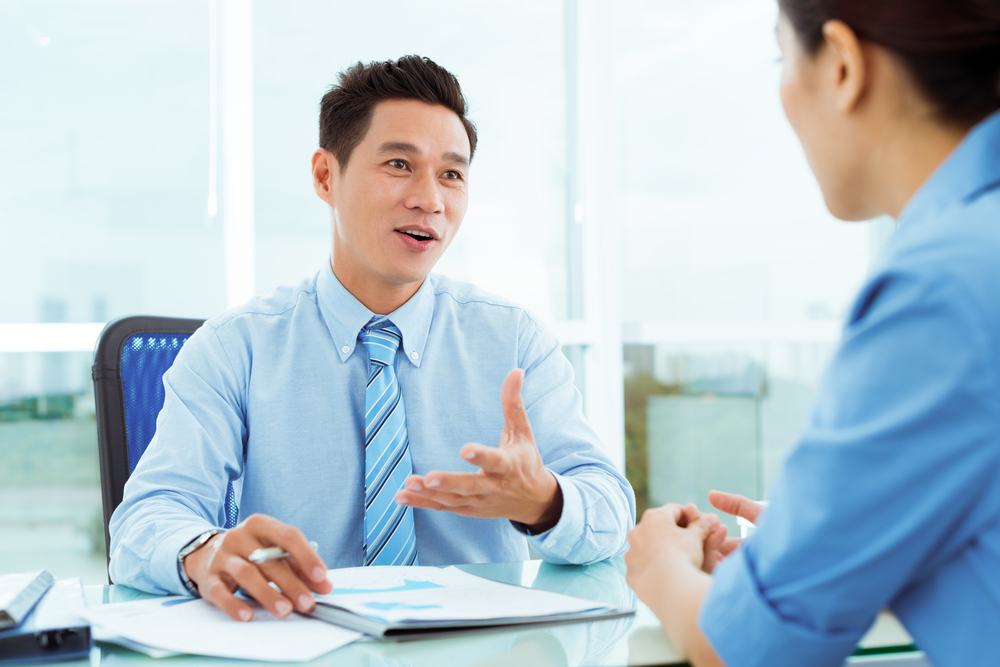 We expect candidates to feel a certain amount of pressure when they sit down for interviews. But that conversation can prove just as awkward for interviewers, according to Flo Yee, a career transition consultant in New York who often works on corporate outplacement projects. The stakes are high for both parties, she notes: candidates want to sell themselves as the right person for the job; the interviewer—whether they’re a recruiter, HR staffer or hiring manager—wants to avoid incurring the costs that come with making a bad hire. Not only that, but the interviewer must control the conversation so that it’s cordial and productive for both sides. “An interviewer has many roles,” said Barry Drexler, a 30-year HR veteran who now consults as “the Expert Interview Coach” in New York City. “One of them is to create a safe environment that encourages communication.” To do that, Drexler suggests starting off with small talk to lighten the mood and get the conversation moving. That will make your path easier if the interview takes an awkward turn later on. Here are five tactics to keep in mind whenever you speak to candidates face-to-face, via video, or on the phone:

Conversations can become uncomfortable because the interviewer hasn’t prepared. “Just as we expect the candidate to know the company, the manager needs to do their homework on the candidate,” Yee said. “That means reading their résumé and preparing interviews that will provide an inventory of their skills.” Arriving unprepared can embarrass both the interviewer and the organization, Lee added. You might start asking questions that don’t align with the candidate’s work history, or probe for examples of how they’ve tackled problems they’ve never encountered—something you’d have known if you’d read their résumé. Either way, the candidate will be left with the impression that you’re more concerned with getting through the meeting than finding the right solution for the job, or that you’re simply sloppy in the way you approach your work. In a labor market as tight as the current one, that’s not the kind of reputation you want to develop.

Interviews can jump the rails for any number of reasons. When they do, it’s important for you to move the conversation back in the right direction. This is especially true when candidates try to take control so they can showcase their strengths and skirt their weaknesses. “Remember candidates should talk 80 percent of the time,” said Drexler, “but if they blurt out something inappropriate or start answering questions with questions, you may have to say politely, ‘I’m conducting the interview.’ Your job is to keep it on-track.”

Despite those challenges, sometimes a candidate may go off on a tangent that can demonstrate their personality and approach to work. For example, it might be smart to let a candidate talk off-topic if the role requires a lot of personal interaction: their discourse could give a sense of how they’ll converse with customers or colleagues.

If the candidate is rude, asks uncomfortable questions about the company’s finances or puts you on the spot in some other way, keep your cool. For instance, if they declare something like, “Well, I assume I’ve got this job locked up,” Drexler suggests you “diplomatically and neutrally” explain the hiring process and let them know you’re continuing with it. Or a candidate might put you in an awkward spot by saying they have a competing offer on the table and owe the other employer a timely decision. In that case, and assuming the candidate is well-qualified, get the offer’s details and ask them to delay their decision so you have time to consider your next steps. Also, be honest. If the candidate expresses concern about the company’s lousy performance during the last three quarters, or wants to know what’s behind the negative news they’ve seen in the media recently, address the issues as honestly as you can. “Don’t fudge it,” Dressler said. “Tell them both the good and the bad.” Such interviews are just a part of life.

Sometimes interviews are awkward from the start—such as when you face an obviously unqualified candidate—or the candidate makes a move from which there’s just no recovery, such as excusing themselves to take a phone call. In those types of situations, remember that the labor market is tight and that candidates talk to each other. If you’re annoyed, hide it. Continue the interview, even if you abbreviate it. “You always want to keep your cool, evaluate the person, and make your decision later,” Drexler said. When he had a candidate step out of an interview to take a phone call, Drexler didn’t say anything when he returned, even though “he’d disqualified himself.” Though he began winding up that particular interview, Drexler “rarely tells people they’re done on the spot,” he said. Yee and Drexler agree that it’s important for candidates to feel they’ve been heard, even if the interview only convinces you they’re wrong for the job. If you decide to cut an interview short, Lee suggests that you “let them talk so they feel like they’ve had a chance to make their case. And keep asking real questions. Don’t switch to chit-chat.”
cover letter Hiring Manager resume
AUTHOR