Dice Staff
Oct 31, 2016
2 min read
The largest technology hubs in the U.S. boast infrastructure and amenities attractive to both startups and established tech firms, including access to a deep pool of technology professionals, proximity to colleges and universities, and the presence of livable communities. But over the past few years, a counter-narrative of sorts has emerged, according to data and interviews conducted by Dice®: discouraged by the high cost of living, crushing taxes, and lengthy commutes, many tech professionals and companies have supposedly decided to flee the nation’s largest tech hubs in favor of smaller towns. (Curious about how your own salary matches up? Try out our Salary Comparison Tool.) Does that narrative hold weight? According to a new analysis by Dice, some of the nation’s largest tech hubs have seen substantial increases in the number of postings for tech jobs, while others report more anemic growth. Washington, DC and Seattle, for example, each saw their number of job postings on Dice rise 19 percent in the twelve months ending in September 2016. Other cities, including Dallas, Los Angeles, and Boston, saw gains; Silicon Valley and Philadelphia experienced varying degrees of declines. 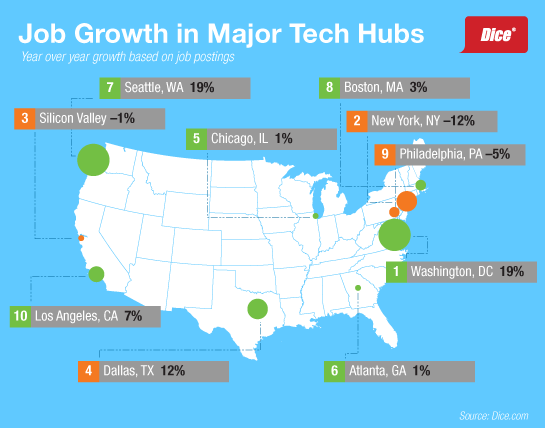 Many tech hubs continue to foster companies seeking top tech talent, thanks in large part to municipal wooing. While that’s not always a way to guarantee steady job growth—New York City, despite some tax benefits for startups, as well as a thriving tech community, saw its year-over-year job postings decline 12 percent year-over-year—it has certainly helped other tech hubs grow. The presence of the federal government (and its lucrative tech contracts) has attracted many firms to Washington, DC and the states surrounding it, while Seattle benefits from a large and established tech ecosystem actively encouraged by local officials. Across the country, the tech economy remains strong. Voluntary quits among tech pros rose in August, according to the latest JOLTS data from the U.S. Bureau of Labor Statistics (BLS), with 577,000 professionals in the Professional and Business Services (Tech) category leaving their positions that month. Analysts generally regard voluntary quits as a sign of economic health, assuming that workers who feel more confident about the economy will leave their current jobs in search of better opportunity. For technology professionals, this latest data suggests that some of the major tech hubs aren’t enjoying breakneck growth. That doesn’t mean the largest metropolises should be excluded from the job hunt; but smaller towns with burgeoning tech communities should still be part of any professional’s strategy. Bob Melk President, Dice
Hiring Job Hunting Job Skills Recruiting
AUTHOR